When it comes to our team culture we are very health conscious just like we are with the ingredients we use to make our pops. So we start fun activities for everyone as an option to get active and get some playtime in after working our pop sticks off.

It doesn’t have to be anything super scheduled either. Like whenever the internet goes down here a group of us always does some stretching together just to get up and move around. It’s kinda become a thing now. Kinda…. 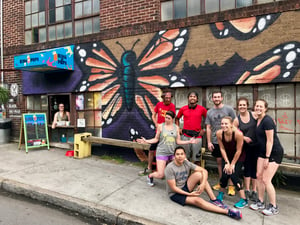 After a few of us kept going on regular group runs on the Beltline so we decided to form a KOP Run Club. We spread the word about it to the rest of our team and since then we’ve opened it to everyone. We did it just to offer our teams an easy way to work in some cardio into their weekly routines and just disconnect. 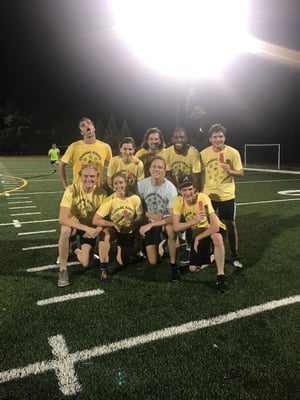 Some of us are also big soccer fans and enjoy playing soccer so they formed their own soccer team The Cardiac Kings. They play soccer games weekly through a community league. Things like this just naturally formed because there was a common interest that was mentioned and an idea was taken into consideration. While the games are a lot of fun and always competitively friendly we’ve won a lot of them. Okay just a few….a couple. We have fun okay!

What we’re saying is sometimes there doesn’t need to be an elaborate plan or super huge incentive to get the team together, up, and moving. We know you care about your work family and can form a kick butt baseball league, volleyball team, or a group that goes on long walks. Just listen to everyone on your team maybe take the lead and let people know of an idea you have. Someone will be up for it.

Diego is simultaneously the most stylish and saucy employee at King of Pops, wearing exclusively black or rose. He is our resident marketing coordinator and is a man of many talents. He runs all of our social media accounts and wears the hat of in-house publicist. He is a founding member of the KoP Run Club, and has the best Peachtree Road Race finish line photo to date.

A Few Tips to Help Avoid That Mid-Summer Slog

Why working with local businesses is important: Local Bee Farms

Business as (Un)usual : A Reflection on my Job Role During COVID-19

I started at King of Pops in a part-time sales support role. I’d left another job with no prospects, and my only requirement of ...
Start Reading