Our company purpose is to create Unexpected Moments of Happiness (we call them UMOHs).

One Spring day in 2018, with little fanfare, we added a "Happy Counter" to the upper right hand of our website.

It was part of a subtle, but important change. We felt really solid about our company purpose, but our goal was unclear. How would we know if we were achieving our purpose? How were we going to win ... more importantly, when would we celebrate?

After months of debate we decided to attempt to track the happiness we created. We knew that it would not be exact, but we figured if we did enough good deeds some people would go out of their way to tell someone about it, and some of them might come to our website looking for a place to do just that.

My personal estimate was that for every 100 UMOHs we created, one of them would get reported on our website. Some thought more and others thought less. After much discussion we landed on the goal of creating 5,000 UMoHs in five years.

Creating 5,000 UMOHs in five years felt both inspiring and achievable (just like our friends at EOS taught us). It felt like a number that we could be proud of, and that we could hustle to make happen.

Hosting yoga events, surprising folks with tasty pops on a hot day, going above and beyond at our cart to make a customer feel loved ... the list was endless - we just wanted to get started. 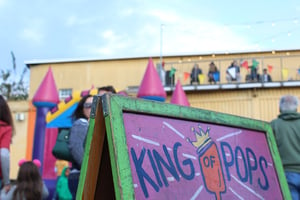 It was exciting - we didn't feel like we would be solving one of humanity's great dilemmas, but we felt like we could make a dent in the world in our own little way.

At the time of publishing - nearly 18 months later - our counter reads 320. (the blog Happy Counter is broken and reads "UMOHs Loading")

Ya. Not that impressive.

Our Happy Counter didn't work. Instead of motivating - it was demotivating. When we reported on it each week it exacerbated the fact that we were doing all this great stuff and we weren't getting credit for it. Of course, the credit wasn't the point, but they always say to measure what matters, right?

Slowly the witty tracking boards we had built to visually measure our progress were taken down. Eventually the meeting cadence that we had carefully planned fell to the wayside.

We still talked about UMOHs, but we eventually stopped talking about our goal of 5,000.

As a leader it was a major failure. Something we had invested a lot of energy into as a company had flat out not worked. For now our five year goal has been stricken from the records (V/TO for those EOS fans out there). In its place is a big ol' _______________.

We're in the process of rethinking a goal that will motivate and keep pushing us towards our purpose of creating Unexpected Moments of Happiness.

I have no doubt our next goal will be great, but for now it's just headache inducing (my friend Matt Tanner calls these "good headaches"). I'll be sure to let you all know what we come up with.

Until then, I'll leave you with the unintended consequences of our failure. ... we rank first on the word "UMOH" when you search Google.

I've found that trying to identify a company's purpose is one of the easiest ways to induce a headache.
Start Reading
Steven Carse Dec 3, 2018 5:16:51 PM 4 min read